Prepared by Andrew Sarcinello, NCC-TU Conservation Chair, in April 2022. The version below is abbreviated from the original report. For a PDF of the full  report, please use the link below.

Download File
PROJECT ORIGINS
In summer 2020, NCC-TU monitored water temperature at 32 sites across four Catoctin Mountain watersheds. All sites monitored are known to support native brook trout populations ranging from stable populations comprised of hundreds of fish to marginal populations sustained only by a few spawning pairs of adult fish in the entire stream. NCC-TU hoped the data obtained would offer insights into the resilience of these native trout populations to the predicted warming effects of climate change and help Trout Unlimited identify areas that might present opportunities for future projects to reduce water temperatures or otherwise strengthen the resilience of these populations to warming conditions. 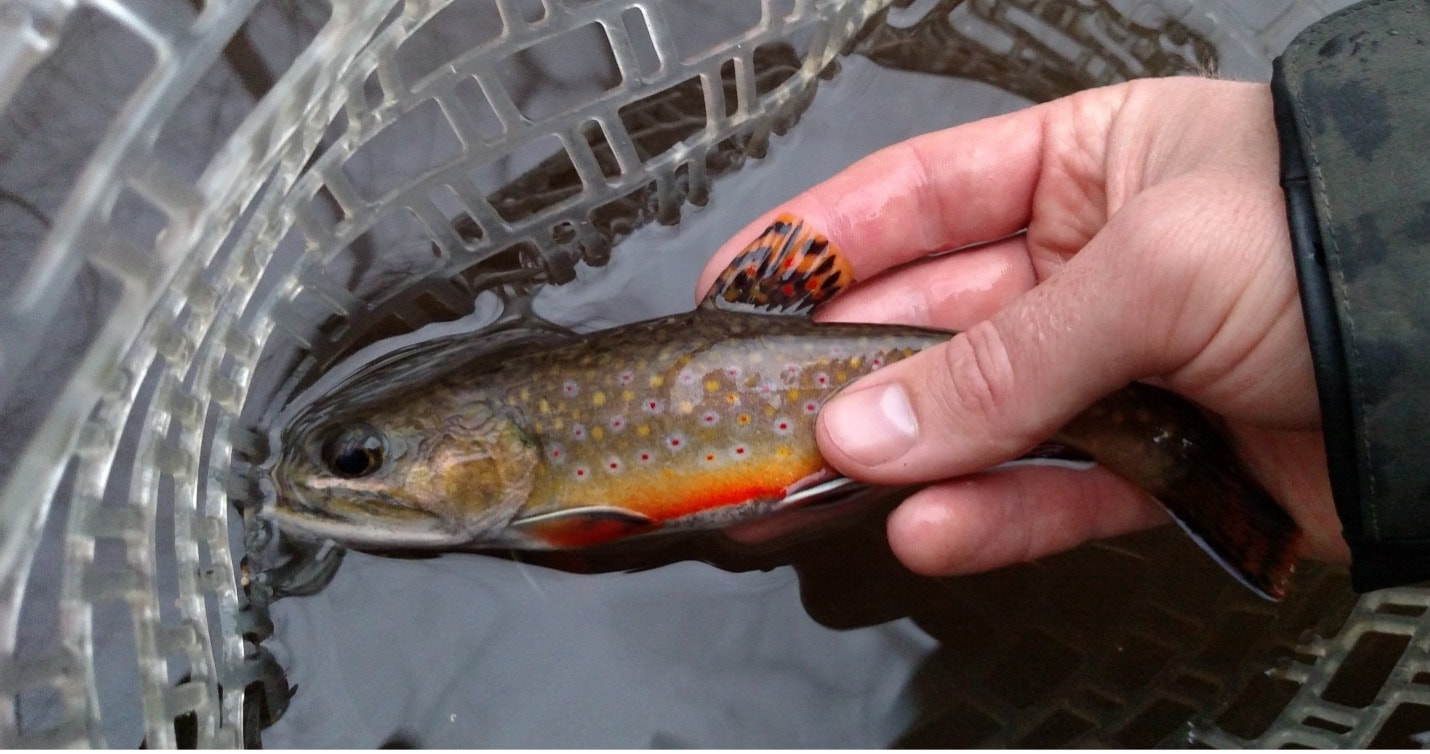 Above: A native brook trout from a Catoctin Mountain stream.
WHY BROOK TROUT?

The plight of brook trout in Maryland (and in many states across the eastern U.S.) has been well documented: man-made disturbances to the natural environment in the form of development, agriculture, and introduction of non-native fish species (brown and rainbow trout) have reduced the occupied range of brook trout to a tiny fraction of the historical range.
​
In 2019, Freshwater Fisheries staff with Maryland Department of Natural Resources (DNR) presented the results of a five-year electrofishing study of all known brook trout streams in the state. DNR found that the number of streams inhabited by brook trout has declined by over 20% since serious study first began in the early 1980s. The rate of extirpation of Catoctin Mountain populations closely followed the statewide average, with lesser declines in far western MD and a dramatic 49% decline observed in central MD’s piedmont region.

NCC-TU scoped the study geographically to complement work previously performed by Dr. Hitt’s team at USGS a few years prior – that study focused on brook trout streams only on Catoctin Mountain National Park land. NCC-TU focused on obtaining data in 4 other sub-watersheds outside of the National Park, with most sites being located on land owned by the State Park, City of Frederick, and a handful of sites on private land (where permission was obtained to conduct the research). To protect sensitive areas and to keep the results out of internet search engines, the specific names of these streams will not be provided in this public report, though people who are familiar with the area can probably figure out which streams were studied from the map below. 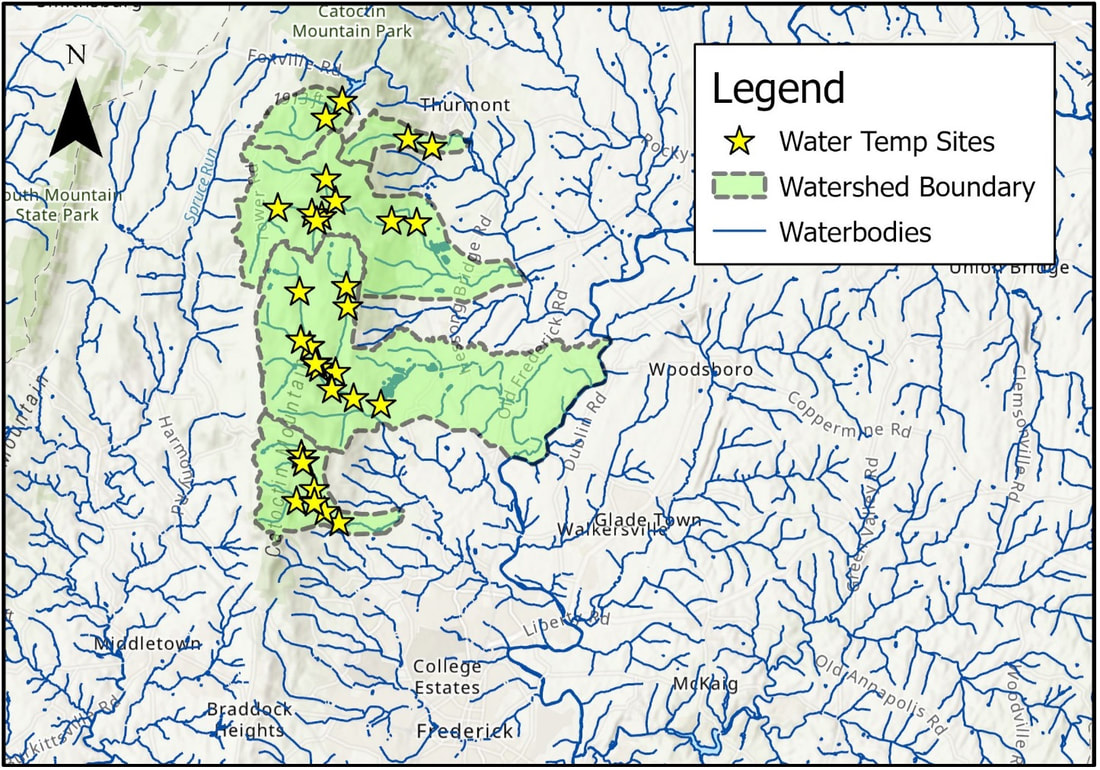 Above: Map showing the locations where water temperature data was successfully obtained during this study. The project volunteers covered a lot of ground and spent many hours installing and later retrieving the equipment.
FINDINGS 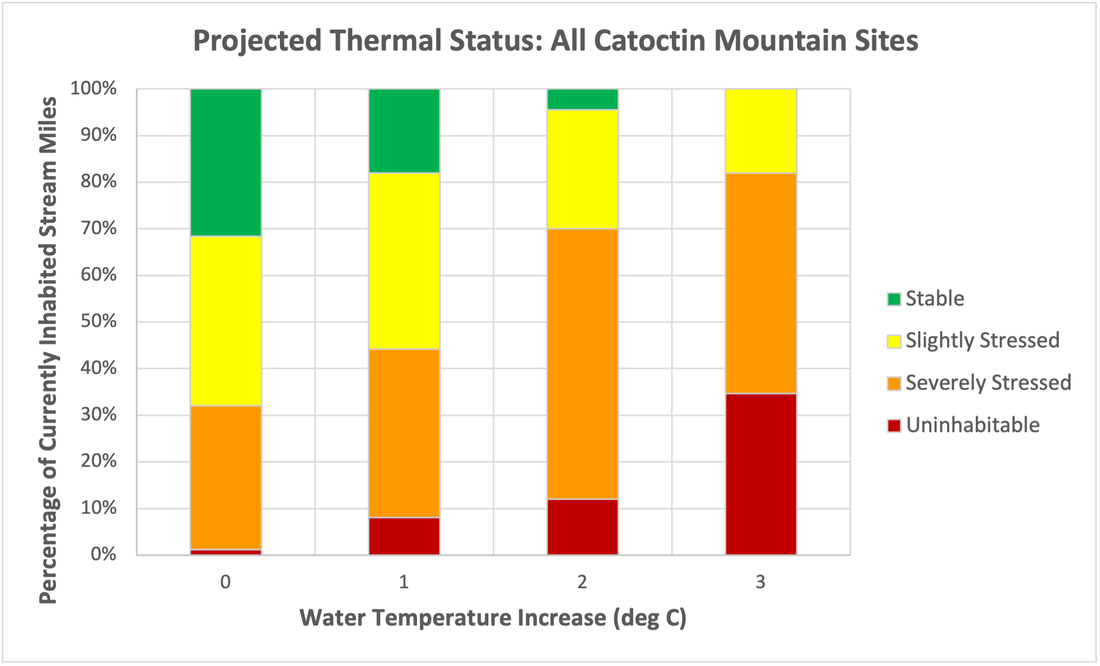 HOW TU CAN HELP

NCC-TU could not have implemented this important water temperature study without help from many organizations and individuals. We would like to thank:

​This project was a true team effort, and we greatly appreciate the contributions of everybody involved. Thank you!